The funny thing about The Rose Tattoo – my only offering to date – is that it just sort of coalesced (and I had to look that up) following visits to a small seaside town in North Kent that was almost totally uncommercialised. 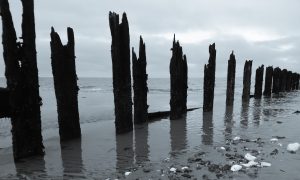 This meant that a number of quite large houses were very close to the beach and, for some reason one of them caught my eye and, and a story involving the two main characters gradually emerged.

To be really honest, I do like the story. That’s probably because a not very attractive older photographer gets off with a very attractive younger woman. Woops! There goes the plot. But, no, because, while I intended the story to be a romance, I hope it is rather more than that. There is a mystery, a ‘book within a book read by another ‘Rose’ and most importantly of all, there is the journey of a seaside housewife as she becomes enveloped in a very different world.

I doubt I’ll write another RoseTattoo (cheers – off) but I hope you enjoy this one. Here’s a little taster:

She turned face him, smiling slightly. Little lines appeared at the corner of each eye. He stuck out his hand.

“Nice to, um, meet you. Sorry I went on a bit, who’s interested in me getting my head blow off, eh!”

Her hand came up to meet his. “Rose. I’m sure someone must.”

“Be interested in you getting your head blown off, or not. I gather you didn’t.”

“Well, ha ha, not exactly blown off – as you can see!” He was sounding like an idiot. It was always the same. And he was still holding her hand. He opened his and she withdrew hers, slowly.

Then he looked at her rather still eyes, and without meaning to said: “Although, actually, I did rather catch it a few times. What with that and general wear and tear. What do they say; ‘the heat, the flies and those dammed drums!’ It was another weak attempt at a joke. He smiled as much as he could.

“Come on everyone, we mustn’t hog Mr Jones’s time”, came from the hall. They were off. Rose got up and walked slowly to the French windows that separated the conservatory from the sitting room. As she stepped through them she turned around at precisely the same time as Dan did. They looked at each other for about three seconds – or was it three hours. Bugger it, he was in love again.

Remember, you don’t have to have a Kindle to read a download, just get the free Android & iOS apps from the app stores or PC or Mac from Amazon.